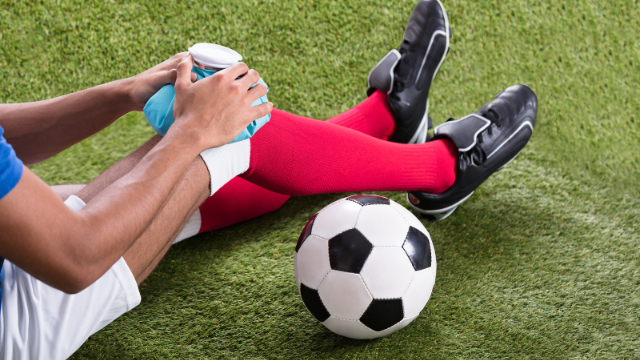 Imagine yourself in the following situation:

You’re on the court, playing in the high school basketball state championship, and having the game of your life. In just over 25 minutes of play, you’ve scored a career high and have been logging a performance for the ages as your team approaches a victory with only minutes to go in the game…when the unthinkable happens. You jump for a rebound and land on the opposing center’s foot, twisting your right ankle inwards and spraining it in the process. Unable to put any pressure on the ankle, you fear the worst as medical staff approaches and tends to your injury. You immediately know that you won’t be able to play again for quite some time, and as you’re assisted off the court, all you can think about is the bright lights in that last instant before the unfortunate landing.

If you can relate to this story in any way, or if you ever encounter a sport injury like this in the future, you’ll know that the next set of questions is almost guaranteed to be the following: “how did this happen and how can I get back on the court or field as quickly as possible?”

While nothing can be done to change the fact that the injury did in fact happen, there is a great deal you can do to improve your chances of returning to your sport in a timely manner. For starters, what you do immediately after a sports injury will have a significant impact on how well and how quickly you recover, which is why you should be prepared for these types of situations with a response plan in place. Failing to completely recover from an injury will increase your chances of additional issues in the future.

For most mild injuries and certain moderate injuries, the best thing you can do right after the incident is follow the PRICE protocol. Traditionally known as the RICE protocol—for rest, ice, compression, and elevation—the “P” was added more recently and stands for “protection.” Adhering to the principles of PRICE is crucial for alleviating initial symptoms and preventing any further issues from occurring in the first 24-72 hours after injury. Here’s what it should entail:

Other home remedies to try right after an injury

The PRICE protocol can be supplemented with a number of other remedies that you can usually perform on your own at home, including:


While these simple remedies are best for mild injuries, more severe injuries require care from a trained professional. In these cases, it’s best to see a physical therapist, who will perform a thorough evaluation of your condition and create a personalized and comprehensive treatment program based on your goals and abilities.