Common cause of LBP can disappear spontaneously without surgery 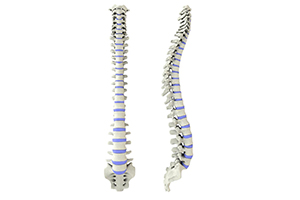 Too much variation in statistics due to different classifications

Low back pain (LBP) is one of the most common medical conditions in the general population. Of its many possible causes, one of the most frequent is called lumbar intervertebral disc herniation, which is when a spinal disc degenerates and breaks down, leading to pain in the back that often runs to the leg. Fortunately, between 60-90% of lumbar disc herniations can be treated conservatively (non-surgically) and lead to positive outcomes for patients, and in some cases the herniation can be reduced and completely resolved. However, statistics vary greatly on this figure, with the percentage of disc herniations reduced in size ranging from 35-100% of patients over a period of between 3-40 months. These statistics vary due to different classifications of disc herniation by different researchers, but clearer figures are needed, so a powerful study called a systematic review was conducted on all available literature on the topic.

A total of four medical databases were searched for relevant studies on conservative treatment for disc herniation, which could've included pain medications, physical therapy, exercise or injections. This search led to 31 studies being identified that fit the necessary criteria, with nine of these being used in the systematic review. These selected studies were then reviewed and used to calculate the probability of discs that regressed and/or were completely resolved.

Probability varies based on specific type of herniated disc

Results showed that lumbar disc herniation can in fact regress, or disappear completely, without surgery. The probability of this spontaneous regression occurring varied widely based on the specific type of disc herniation present. It ranged from as high as 96% for disc sequestrations to 13% for disc bulges. Overall, it was found that about 43% of sequestrated discs would completely resolve over time compared to only 15% of extruded discs. Most spontaneous disc regression happened within the first year, but in some cases regression was noticed as early as two or three months. These results suggest that in general, surgery does not seem to be needed to effectively treat all lumbar disc herniations, and many cases can be resolved completely with conservative treatment such as physical therapy, depending on the specific type of herniation.

-As reported in the February '15 issue of the Clinical Rehabilitation